Ahead of the highly-anticipated seven-match Isuzu UTE A-League Men's Finals Series scheduled to kick-off at AAMI Park, Melbourne, from 14th May, 2022, Isuzu UTE Australia (IUA) are introducing a new player to the game, with a remote controlled Mini Isuzu D-MAX Ute set to deliver the match ball to officials at each fixture.

With over 450 goals scored across the 156 matches played between the 12 Australian and New Zealand football clubs during the 21/22 season, it all boils down to the upcoming seven match final series; consisting of two elimination finals, four semi-finals, and a grand-final, to decide this year's champions.

As the naming rights partner of the A-League Men's Championship, IUA has supported the League with a fleet of vehicles for ground and operations support. However, for the final series, IUA is getting involved on the pitch by debuting a Mini D-MAX tasked with delivering the match ball at the start of play.

“Partnering with the A-Leagues has been an absolute privilege, and we are excited to welcome our Mini D-MAX to the upcoming A-Leagues Final Series. We've watched from the sidelines all season, so we are excited to be a starter at each of the upcoming finals fixtures and have the honour of delivering the match ball to the captains of the top teams from our League,” said Isuzu UTE Australia Managing Director, Hiroyasu Sato. 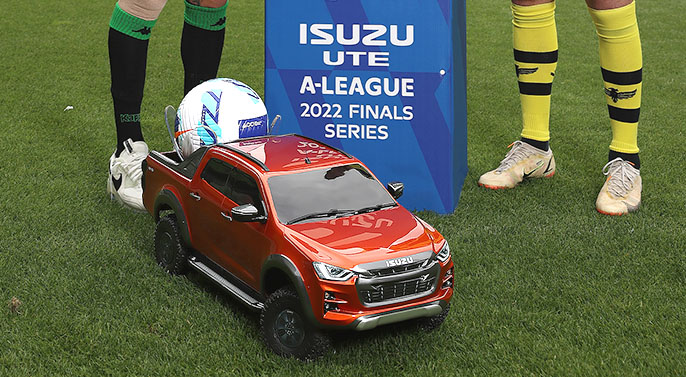 Finished in the iconic Volcanic Amber metallic—an exclusive colour synonymous with the flagship X-TERRAIN—the Mini Isuzu D-MAX is expected to impress spectators at each of the seven final series matches, as it zips across the pitch at speeds of up to 40kph to deliver the match ball to start play.

Hand-built in Brisbane using the latest in 3D scanning, CAD design, and 3D printing technology, the 1/6th scale replica Isuzu D-MAX X-TERRAIN measures in at 860mm in length, 340mm in height, and tips the scales at 15kg.

Underneath the fibreglass body is an Axial SCX6 Rock Crawler Chassis, a popular choice amongst hobbyists. The 1,200Kv sensored brushless electric motor is controlled via a 120-amp electronic speed controller and is powered by a 14.8-volt 5.2Ah LiPo battery. With the lush turf of the football pitch in mind, the mini D-MAX features dual-range four wheel drive, with a metal-gear 4WD transfer case and 25:1 high-range and 85:1 low-range ratios. Traction is further enhanced with locked front and rear differentials, and kept with the terrain via multi-link suspension with adjustable aluminium coilovers. A custom moulded perspex claw mounted in the rear tray secures the match ball while the D-MAX is in motion.

Tasked with delivering the match ball safely and keeping the Mini D-MAX on all four wheels, is a team of two ex-Team D-MAX stunt drivers and I-Venture Club trainers, who will drive the Mini D-MAX via remote control at each of the upcoming fixtures.

The Isuzu UTE A-League Final Series is set to kick-off from 14th May, 2022, with the Grand Final deciding the 2022 champions on 28th May, 2022, and will be televised across Network Ten and on-demand via Paramount+.

Keep up to date on the adventures of the Mini D-MAX, by searching #DMAXDelivery and #MiniDMAX, and by following IUA on Facebook and Instagram.